Out loud is a music piece in the shape of a strainer where most of the sounds have gone away. The main composing was intentionally erased and only the leftovers of a gone piece survive, the unwanted, the declassed sounds.

I say voiceless: I don’t want to write one more piece.

The music vanished and we are facing now its remains: breaths, movements, mistaken notes, eye contact. As if it were junk spread on the beach, this “new piece” invites to draw the shape of a missing party from the waste.

The music is defined for what it is omitted instead of for what it shows, like a post-Cage experiment reloading the forgotten declassed sounds.

I write a silent piece with a lot of notes.

The musicians and the audience are still there, occupying the hall, facing a full nothingness a bit silly. Both audience and musicians are repeating its concert rituals with the hope of recovering some sense.

Tired of being told…

Talk to me in my face!

The musicians are asked to play the shell of the egg, better said the air around the egg and the trombone return the notes from the outside in, blowing comebacks. Hopefully, the audience laughs, filling the air around like a breath of spring.

Gestalt shows diverse forms of communication between two performers and how each way of relating generates different music structures (Gestalt). In between music, sound, and space design, Gestalt is music in the form of a treatise to be perceived in-between categories.

The piece is based on 10 sections in the form of scenes. Each scene speaks about different ways of relationships between performers, their link with objects, musical instruments and the design of the stage, which is changing over time.

This project is a collection of small pieces, where the live process image from the projectors is in counterpoint with the clarinet and cassette players. It is a book with different episodes in between formats,  austere exercises on image and sound, made with analog means: slides, strings, and live music.

Comic book is inspired by the first animation film pioneers like Norman McLaren and his inspiring work on step motion techniques. McLaren was also a pioneer in image and sound research composing visual music and graphical sound. My Comic Book shows these “step motion techniques” in a live version: the black box is just in front of the audience´s eyes.

Text invitation for the premiere in Amsterdam

In the context of the presentation of the book “Notations” in Ámsterdam I would like to invite you to the performance of my new piece  “Comic book” (comic in Spanish is also funny) for clarinet and slide projectors. In this occasion we will introduce three episodes of this book: #1. Geometry counterpoint; #2. Solfege lesson and #3. Dancing staff in honor of the Notation book.  Everything home made with tinny recycled papers and slide projectors bought in Dutch markets for maximun 15 euros price (ticket is 5!). 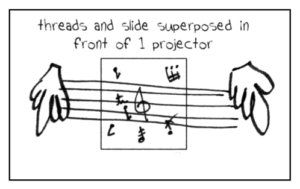 In my orchestration book, electric fans are classified in diverse instrumental families considering diverse features: they undoubtedly belong to the wind family; they are on top of that, noise generators; from a kinetic perspective they are members of the instruments “that spins around.” Multiple interpretations of the same allow a special interconnection between objects, spreading the chamber music experience into a unique personal listening.

“A choir of small ventilators, that like a mechanical garden, move their heads bringing sound and movement to the music.”

The more concrete, the more abstract

Rather than prescribing an ideal music of the future, Schaeffer’s didacticism
requires us to submit to a process in which sound is re-imagined or experienced anew, and new effects of listening are discovered and learned.

The fan is attached to the sounds as much of the sound is attached to the fan. We cannot conceive the machine without the sound, or the sound without the machine: one refers to the other. But when the fan is on stage making music, the sound appears to lose its inherent connection to its source and becomes an independent phenomenon: we start hearing the fan as a music instrument. After this switch in our mind, we can focus on the sound itself: its overtones, pitch, colored noise, residual tones, and all kinds of glorious “side- effects”. Curious enough, the production of fresh air, the main purpose in any electric fan, becomes something completely irrelevant. When the fan goes musical, the sound can be undoubtedly routed with its source without losing its identity: it looks like a fan, it sounds like a fan, it is a fan!. Even the modifications applied to the sound by the use of “extended techniques” enhancing and preserve the nature of the sound as two sides of the same process.

William Gaver, How do we hear in the world?

When a fan is performing in a concert hall, this new context brings new associations and displacements in our minds. We can concentrate more easily on the sounds because the device is on stage. Same as we focus on the textures, colors, size, and position of Duchamp’s porcelain urinal because it is shown in an art gallery. Context is substantial.

Matter matters
What is music? What is a sound object? This unanswered question triggers all kinds of different theories and works, inspiring not only the composition of new music but mainly changing our way of listening.

Split piano is an ongoing project that collects a series of short works where the piano is split off and perceived from a transversal perspective. The universe of the conventional piano is expanded by using objects, lights, gestures and recordings.
Chapter I: Live movies
#1. Licht / light
#2. Knipoog / wink
#3. Straal / ray
Inspired by the animation techniques created by Norman McLaren, these etudes for one hand, a stand light and sound objects, are thought of as short movies to be played live.
Chapter II: Tapes
#4. Zeef / strainer
#5. Dans / dance
#6. Potlood / pencil
These three pieces are based on intervened recordings of music by Robert Schumann. The piano (and the pianist!) interacts with the tape in different ways: drawing, performing choreographic movements, or using the music notation as part of the performance.
The recordings can be done using vintage cassette tapes or a mobile phone, representing different historical periods, in addition to the dialogue with the music of Schumann. The media devices modify not only the sound color but the act of perception, bringing back Marshall McLuhan s statement “The medium is the message”