for orchestra
1st prize Rychenberg Competition, Winterthur, Switzerland
Based on the photo series “Wounds of violence” by Adél Koleszár.

The human skin has its sonic representation on the whole orchestra like a flexible and elastic body, represented by big percussion instruments: timpani, thunder sheet, bass drum, lion’s roar, and tam-tam Big surfaces of skin, wood, metal, string and paper are hit, rubbed, stroked, scratched, and touched with the fingers by the percussionists, echoed by the rest of the orchestra. It is a “concerto” for big surfaces, where the soloists are not only the percussionists but “the matter itself.” The orchestra doesn’t play “around” or “with” the players but “inside”: in an implosive gesture, the percussionists “swallow” the orchestra which is playing from the heart of their matter. The orchestral tissue expands and contracts in various levels: density (from solos to full divisi), rhythm, and tone division (going from small microtones to wide intervals). Ornaments and microtones in this piece are used mainly to create textures, crafting the sound from “inside out” and modeling micro-variations. As a cantus firmus, Tissue uses a traditional Mexican song, “La llorona (The weeping woman”) close to the spirit of Adél Koleszár’s geographical and emotional landscapes. Lyrics refer to romantic love, mainly as suffering and death, and women as an object to be deathly loved and consequently disposed of.

Palabras uses words in two different ways: words as sounds, and words as meaning.
Written for 1/16 tone piano, saxophone, viola and voice, the microtonal division of the tones remains the fluctuation of the spoken voice.

The piece is divided into five different blocks of spoken language that go from the proper spoken voice (Part IV) to a melodic line (part II) which is sung by the four instruments. Every block or surface has a different quality in relation to different kinds of discourse.
Julian Carrillo,s  1/16 tone piano was a primary inspiration for this piece and its relation to the spoken voice. The microtonal divisions of the piano are in the frequency range of the spoken language.

This piece is based on the idea of suggestion rather than revelation. The music operates in the outer limits of perception; events are sensed rather than clearly perceived, contour prevails over detail, the respiration of music is whispered. The narrow dynamic range, the restricted instrumental timbre and the blurred effect of the rhythmical combinations aim at creating music that is slightly ‘out of focus’. Melodies are masked, melos being more important than the melody itself. “Casi cerca” (almost close) is related to something possible to perceive but impossible to touch. The word ‘casi’ (almost) is the thin dividing line that keeps these two dimensions of distance and closeness apart.

1) There is a main melody presented at the beginning of the piece by the soprano (measures 6 -9).
In m.34 the same melody is spread among the instruments. Some instruments are duplicating some notes of this single melody, so these duplicated notes should be coordinated and sound as one.
In m. 41 the same melody is played by piano harmonics.

2) The harmony of the piece is based on three regions of quartertone clusters.
Clusters distribution by instruments (there are some duplicated notes) 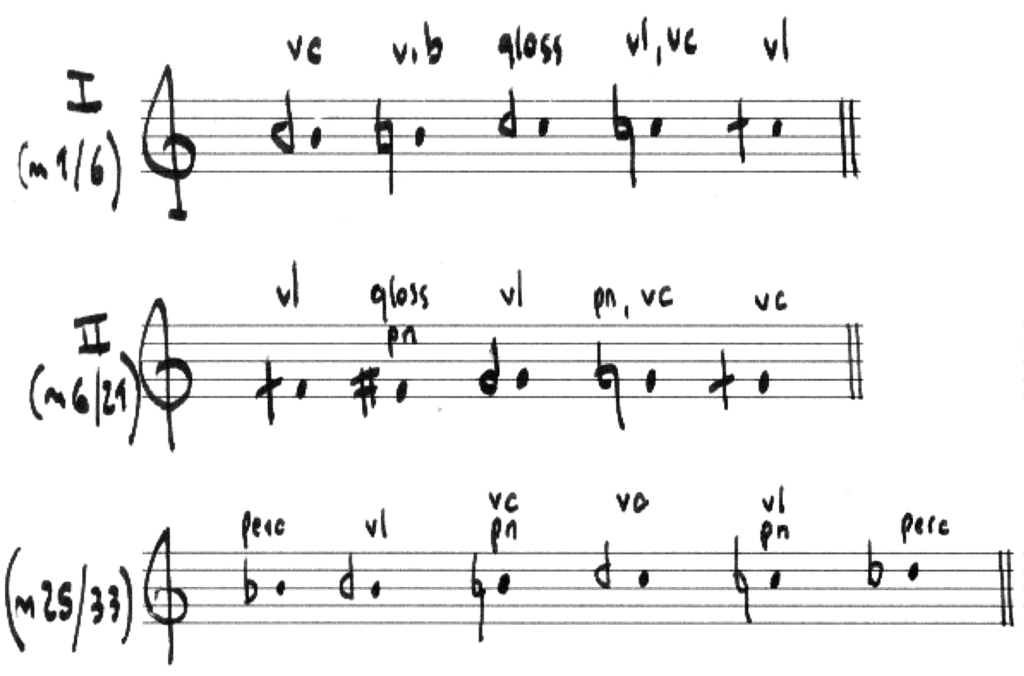 3) Even the timbres of the piece are similar, everyone should have a personal color. (ex. vl arco ordinario; vc sul ponticello different from vibraphone and bocca chiusa of soprano)

4) There are repeated rhythmical patterns usually alternating two pitches (the pitch interval in quarter tones is indicated in the score: ¼, ½, etc, with a square below the staff).

From the beginning of the piece.

Progressively the instruments are changing the length of patterns, but always going from one pattern to another.

Here most of the patterns alternate two notes of different duration (3+2, 4+3, 5+4, except for the cello that keeps regular.

Trumpet and percussion in sixteens play always the same motive starting in m.12 but one of the instruments is rhythmically slide (one, two or three sixteens), so the second instrument works like an echo of the first.

Casi cerca / Almost close is based on the idea of suggestion rather than revelation. The music operates in the outer limits of perception; events are sensed rather than clearly perceived. Contour prevails over detail, the respiration of music is whispered.
The narrow dynamic range, the restricted instrumental timbre, and the blurred effect of the rhythmical combinations aim at creating music that is slightly ‘out of focus.’
Melodies are masked, melos being more important than the melody itself. Casi cerca is related to something possible to perceive but impossible to touch, impossible to see, impossible to hear. The word “casi” (almost) represents the fragile line that divides things that are close, completely apart.

Related post/s in my blog:

Palabras (words) is a piece which work with words in two different ways: a) “Palabras” as sounds: the texture of the spoken language, the inflections of the human voice. Words as colors; b) “Palabras” as syntax: words combination create structures and musical grammar: linearity, polyphony, etc. Words as architecture.
The piece is divided in five different blocks of spoken language that goes from the proper spoken voice (Part IV) until a melodic line (part II) which is sung by the four instruments. Every block, or surface has a different quality in relation to different kinds of discourse.
Julian Carrillo,s  1/16 tone piano was a primary inspiration for this piece and its relation to the spoken voice. The microtonal divisions of the piano can give and illusion of words. I neither try to “copy” specific words, nor  reproduce with the instruments a spectrogram (which is a “picture” of the sounds frequencies). I took these ideas as  musical material to be developed with musical rules.

Is a music made of intentions where the gesture is more predominant than the speech (sound) itself. We can find beginnings of phrases, whose energy is dissolved as soon as they start.

The four instruments share a melody which represents a linear discourse. This clear melodic line has some depth movements in relation to perspective:  the instruments moves from foreground to background in this continuous but sliding line.

Based in “Rhizome” by Gilles Deleuze, this section of music is about multiplicity and multiple connections. Every instrument has an independent line but the four of them  flow at the same time. Sometimes the individual lines meet in a brief chord creating  a web of  multiple connections without hierarchy. These meeting points represents the “anti-chords”, the “anti-accents”, as a subterranean  pianissimo rhizome (root) among the instruments.

I compose this section cutting and gluing pieces of papers wich talk about neurological disfunctions in the language area of the brain. Anyway the texts are only partially recognizable: they are as a piece of paper able to be tear to pieces. Also the meaning of the words is crumple, wrinkled, fragmented.

The same melody of section II is reduce to its basic points. It was my goal not to build the points but the space between things: to compose the silence with the sounds as a frame. This section is also about synthesis and memory and how we can reconstruct the whole through few significant  points.

The design of language is based on two components: words and grammar. A word is an arbitrary association between a sound and a meaning. For example, English speakers use the word cat to refer to a certain animal, not because the word has any natural connection with this animal but simply because it is a shared convention used by a community of speakers who have all, at some time in their lives, memorized the connection between that sound and that meaning. Words in the huge open-class vocabulary refer to a vast number of concepts, such as objects, states, events, motions, qualities, people, paths, and places and include nouns, verbs, adjectives, adverbs, and some prepositions. Words in the much smaller closed-class vocabulary have a more restricted set of meaning related to time, logic and the relationships among the content words. They are used primary to define a sentence’s structure and include articles, auxiliaries, prefixes and suffixes, particles, and prepositions[1].
Neurology’s favourite word is “deficit”, denoting an impairment or incapacity of neurological function: loss of speech, loss of language, loss of memory, loss of vision, loss of dexterity, loss of identity (…) For all of these dysfunctions we have private words of every sort- Aphonia, Aphemia, Aphasia, Alexia, Apraxia, Agnosia, Amnesia, Ataxia-[2]
The tip of the tongue state involves a failure to recall a word of which one has knowledge. The evidence of knowledge is either and eventually successfully recall or else an act of recognition that occurs, without additional training, when recall has failed.
For several months we watched for “tip-of-the-tongue” states in ourselves. Unable to recall the name of the street on which a relative lives, one of us thought of Congress and Corinth and Concord and then looked up the address and learned that it was Cornish[3].
Modern psycholinguist studies have shown that people who have Broca aphasia comprehend sentences whose meanings can be pieced together from the individual meaning of content words and prior knowledge of how the word works. For example, these patients can understand The apple that the boy is eating is red. Boys eat apples, but apples do not eat boys; apples are red, but boys are not. They cannot understand The boy that the girl is chasing is tall.[4]
Patients with Wernicke aphasia often shift the order of individual sounds and sound clusters and add or subtract them to a word in a manner that distorts the intended phonemic plan. These errors are called phonemic paraphasias.[5]
Patients with Conduction aphasia comprehend simple sentences and produce intelligible speech but, like those with Broca and Wernicke aphasias, they can not repeat sentences verbatim, cannot assemble phonemes effectively, and cannot easily name pictures and objects.[6]
Saxo:
Dr P. was a musician of distinction, well-know for many years as a singer, and then, at the local School of Music, as a teacher. It was here, in relation to his students, that certain strange problems were first observed. Sometimes a student would present himself, and Dr P. would not recognize him; or, specifically, would not recognize his face. The moment the student spoke, he would be recognized by his voice.[7]
Piano:
But if he is interrupted and loses the thread, he comes to a complete stop, doesn’t know his clothes-or his own body. He sings all the time-eating songs, dressing songs, bathing songs, everything. He can’t do anything unless he makes it a song.[8]
Viola:
I think that music, for him, had taken the place of image. He had no body-image, he had body-music: this is why he could move and act as fluently as he did, but came to a total confuded stop if the “inner music” stopped.[9] 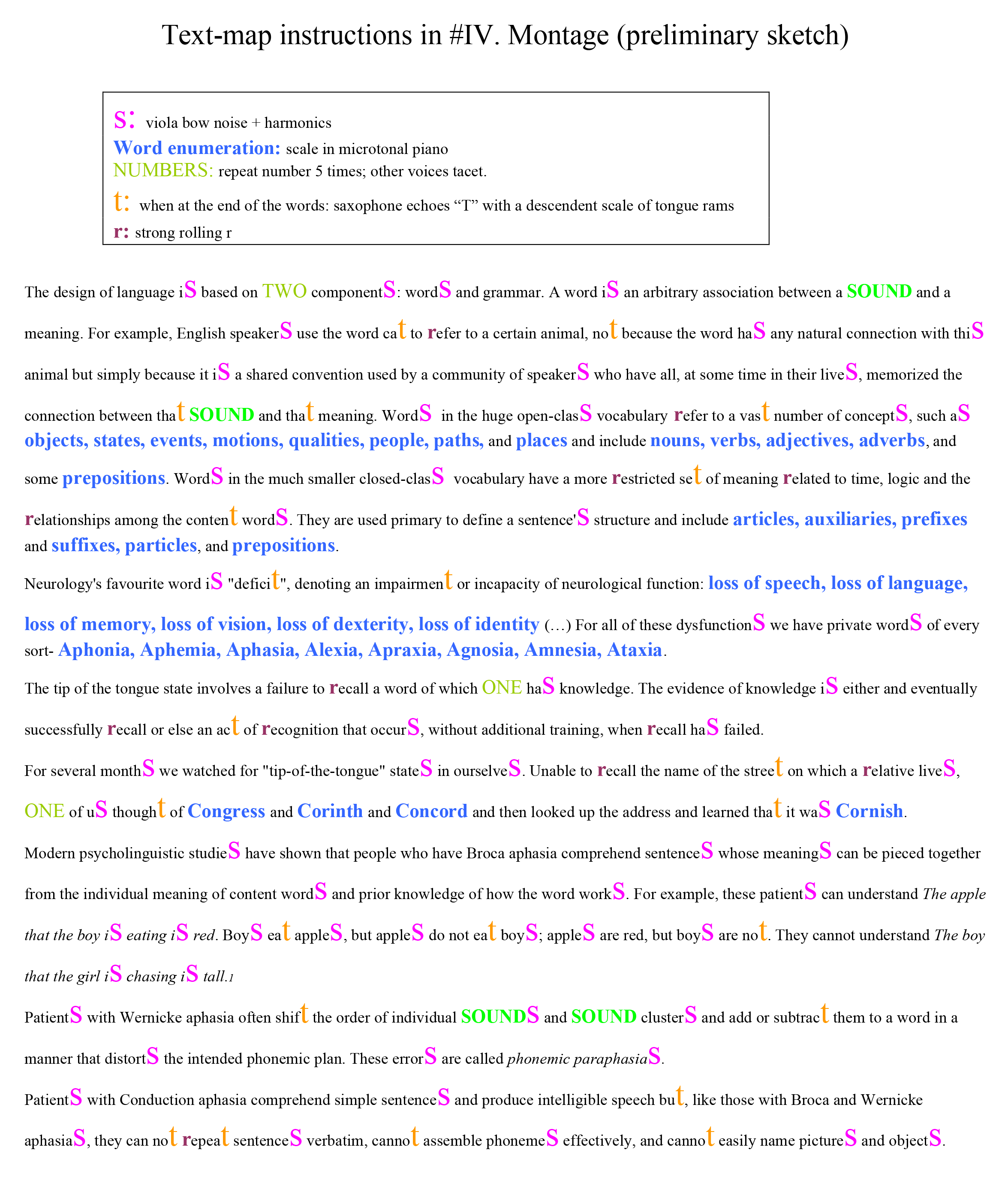