I will initiate this talk with some excerpts from an interview I had during the Aleph Ensemble Forum for Young Composers, in 2004 in France(1).

“First, there is the material condition of music, which is represented by the physical laws of sound. Sound constitutes a material like stone, grass, water, a material with its own weight, color, speed. […] I have always been struck by the sensuality of sound. […]
Another aspect of my work consists of classifying sounds by criteria such as weight or color. I find a relationship between the expansion of the temporal line and the materiality of the sound: the temporal line is like an extension, a dilation of the material in time. In this way, you obtain a relationship between form and material.”

It always fascinates me how to read the materials, how to deeply listen to them, understanding not only their wavelength but their intimate behavior, their inner truth. I think my ideas about music change throughout my life. But then I realize I have always had the same ideas. In fact, I recall similar ideas about things since I was eleven and I was not still a composer. I can remember the way I experienced the world. 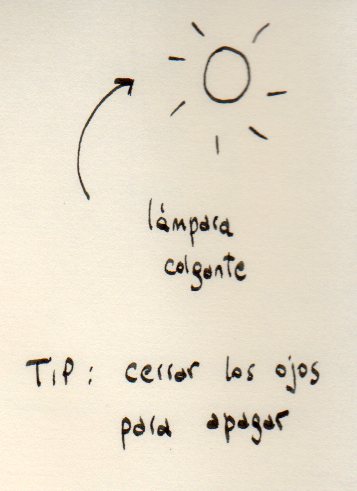 When I was a kid, I used to go camping with my family during our summer holidays. Together with my sisters, we liked building houses in the woods. Our initial task was to sketch the various rooms on the ground, drawing their perimeters with a wooden stick. Those areas would be supplied with occasional furniture and proper decoration, everything made with pieces of wood, leaves, and stones. Our designs were complex, including different floors, stairs, and imaginary artifacts.
Seen from the outside, it may have looked like three little girls playing with stones and sticks, drawing lines on the dusty earth. But for us, our house was as hard as cement. We were carefully walking through the doors withdrawn on the floor and never through the walls; we were climbing imaginary stairs to finally enjoy invisible lunch on a table crowned with a flower pot.

Composing is the same thing: it is about determining the materials, organizing them according to their particular properties to build imaginary spaces.
Sound and form are intimately intertwined. The physicality of sound expands in space and time. Some materials are fast, others are heavy. And certain sounds possess a remarkable complex structure that can be perceived as a whole composition in themselves. 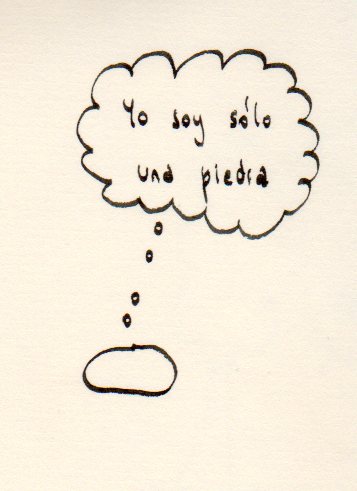 The classical tradition routes sound to musical instruments. From a contemporary perspective, we know the piano artifact can be perceived as many different pianos depending on the way it is used. In my music, there are, of course, differences between sounds coming from objects or from musical instruments, but there is no hierarchy. The orchestration priorities are decided upon the sound qualities.

In 2002 I initiated a project under the name “Música invisible/invisible music” based on the exploration of new sounds and techniques for solo instruments (2). My research didn’t focus only on the technical aspect. I strongly believe that extending the instrumental skills brings unavoidably new ways of listening. A melody in 1/32 tone in the flute not only deals with micro-tonality but also defines a new listening context; a trumpet player submerging the instrument into a tin of water not only brings distorted sounds but also changes the theatrical role of the player in a concert. The catalog of physical curiosities is subordinated to a particular way of conceiving certain musical instruments, working in the abstract zone where the sounds lose their bound with tradition and become out of the radar. They become Música invisible. 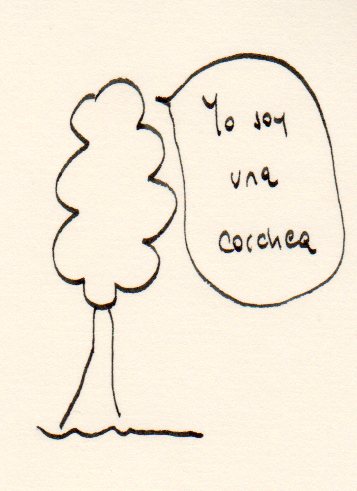 This metaphor invites us to place our focus in a slightly unusual angle, focusing on those frequencies that we ordinarily don’t see. We know that music is always invisible. But this metaphor encourages us to perceive something that doesn’t exist: a small displacement that places our conception at a slightly different angle. 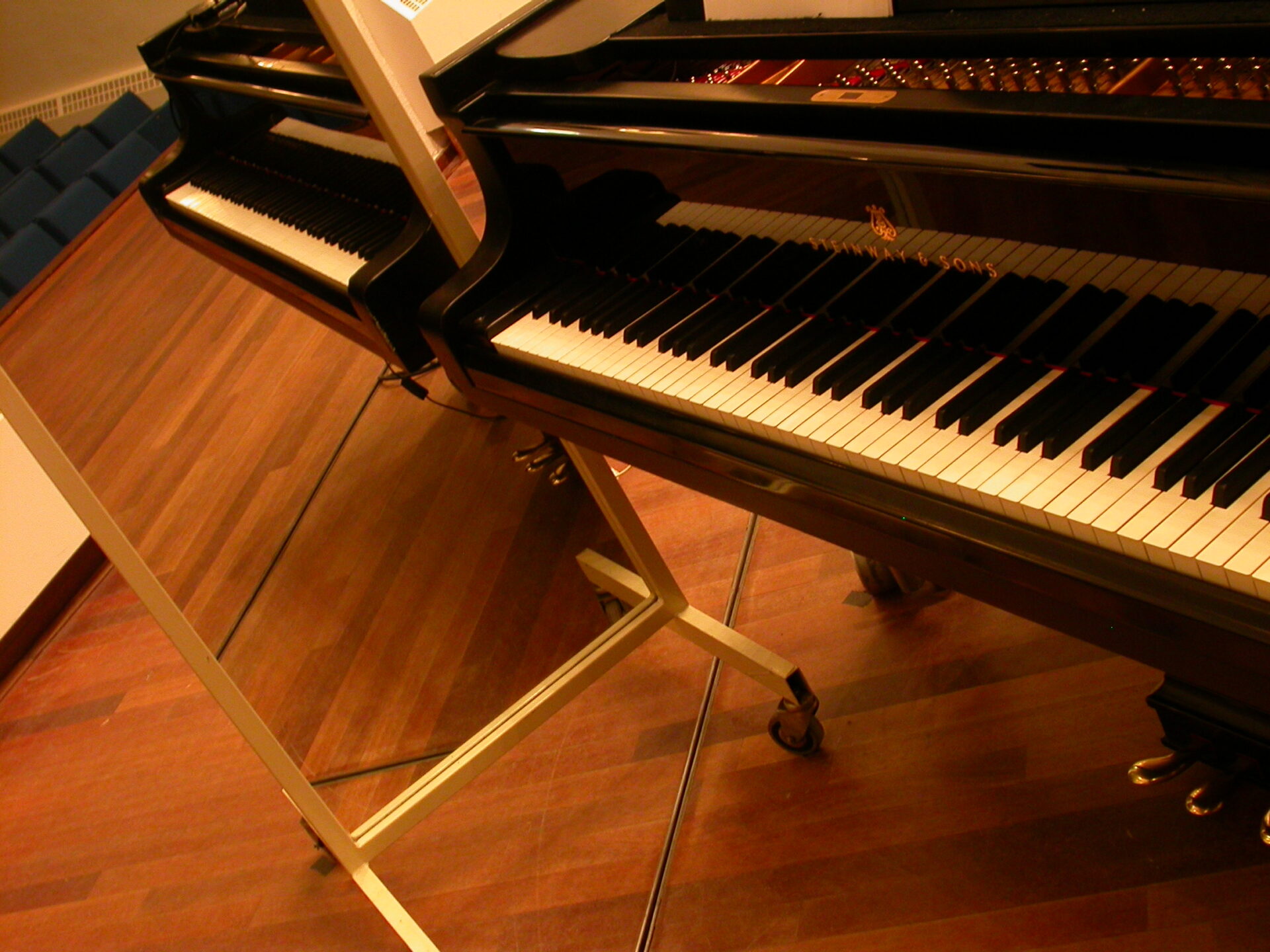 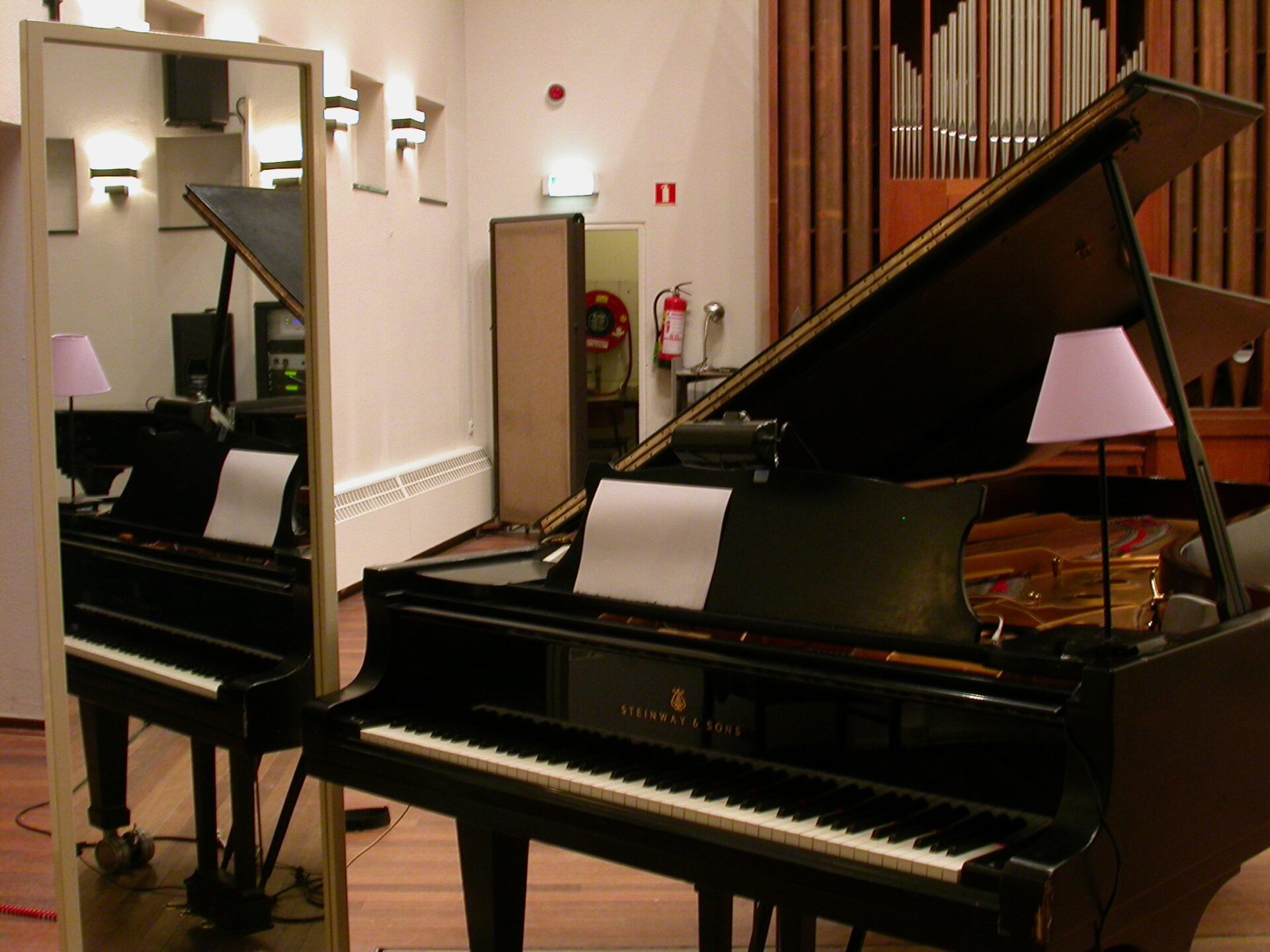 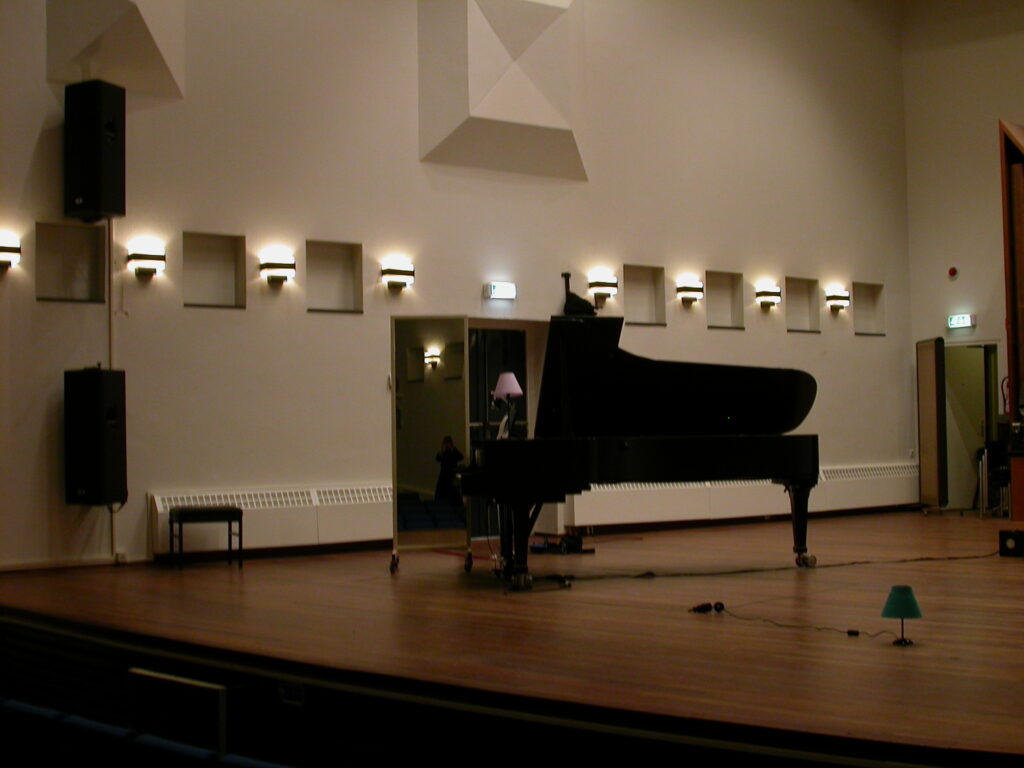 My piece Gesleten piano has lamps, tapes, and a broom. It is a piano piece with “simple” added objects; everything is fully notated on a very clear score.

The usage of materials is organic and simple but the reality of life is much more complex. Explaining to performers extra-musical actions takes a lot of energy and rehearsal time. It is easier with percussion players because they are used to deal with objects (and carrying them!)

The usage of extra-musical resources on chamber music will improve in its implementation with the practice (in fact is already improving a lot!), but we, composers, should think and re-think the usage of each extra material we employ. In the concrete practice (rehearsals, transportation, stage set up, explanation to new musicians, sharing the piece with other pieces in the program) each gesture out of the ordinary becomes exponential. Anything we think is complicated, will be very complicated. Unusual is generally not practical.

We can write, of course, whatever we want. We can write a string quartet with only one single note of a flute, for example, or we can write a long piece for a triangle that includes 5 seconds of timpani music (I am thinking more about transportation than in the music). It is like buying a very expensive dress to use only one time. .. why not? These beautiful extravagant and “non-purpose” gestures can be very relevant if we want to go that way. My point is that composers should acknowledge the complexity of apparently simple things when included in the usual practice. Not as a restriction but as an act of responsibility, getting to know our musical materials and their possibilities better. Working with props and extra-musical actions the same way we do with the traditional practice. 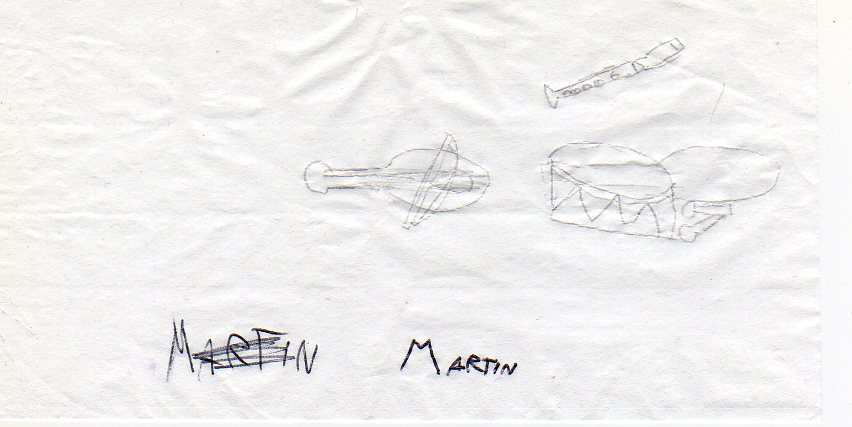 When I was a child my father had built a door in the yard of my apartment with the lid of an old washing machine. Once through it, the little door led to a parallel yard –which in fact was the same one. In appearance the yard was alike, but if one paid attention, the same things started behaving in a strange, a rather magical way. The drawing of the tiles had the power to hypnotize you, and the insects from the plants could read your mind. Not to mention the effect if my mother showed up with a snack… she terrified me because I thought she was a “double”. I only could stay for a few seconds in that parallel world and then, running and scared to death, went through the little door back to the “authentic yard” to have a snack with my real mum. While I was composing Gespleten piano, I remembered this story from my childhood because in this piece there are real objects and their duplicates. A mirror duplicates the visual space, the cassette players emulate the aural space. There are also extra-musical “twin” objects.  I like to think that in the game of the piece it is not clear which is the original and which is the copy.

Lately, I like to explain my music through anecdotes because they are as confusing as the program notes but they are more easy-going. 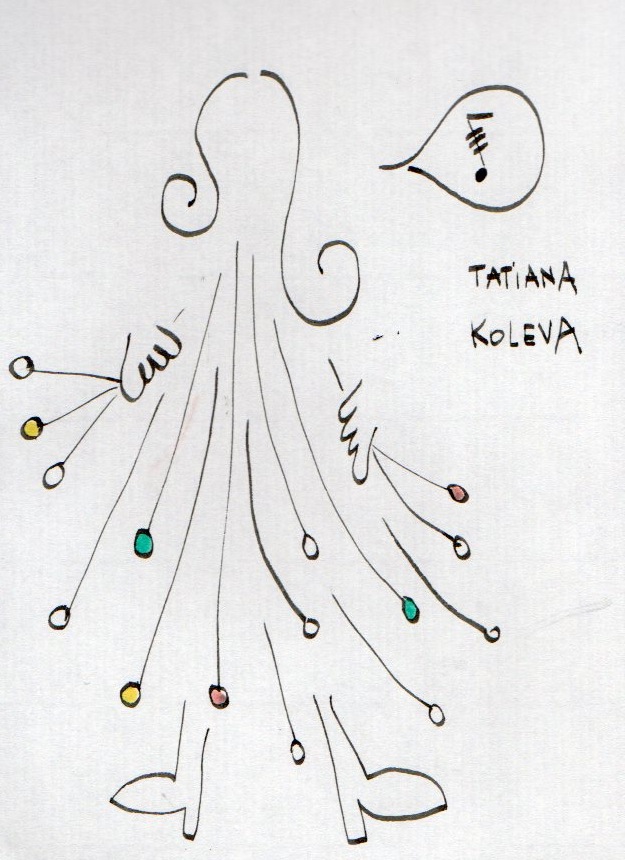 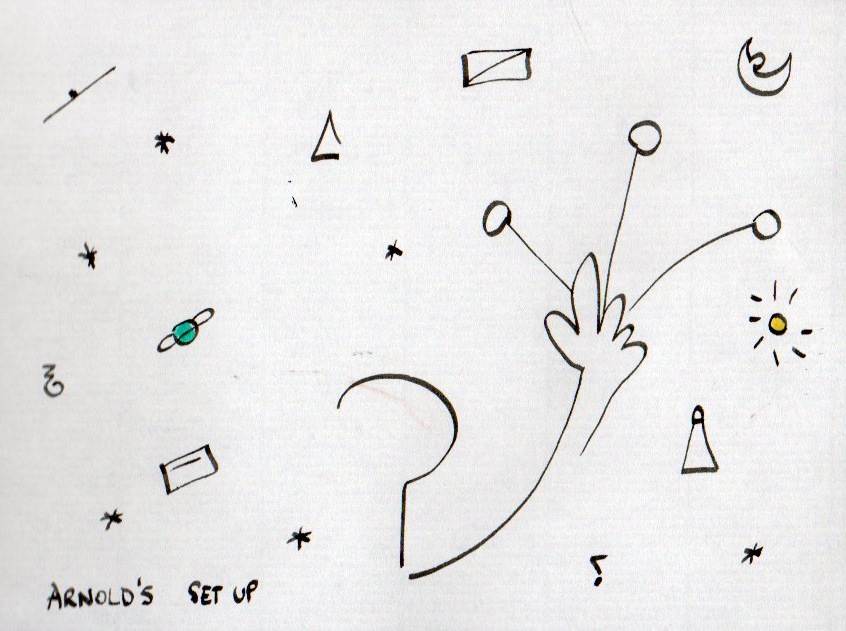 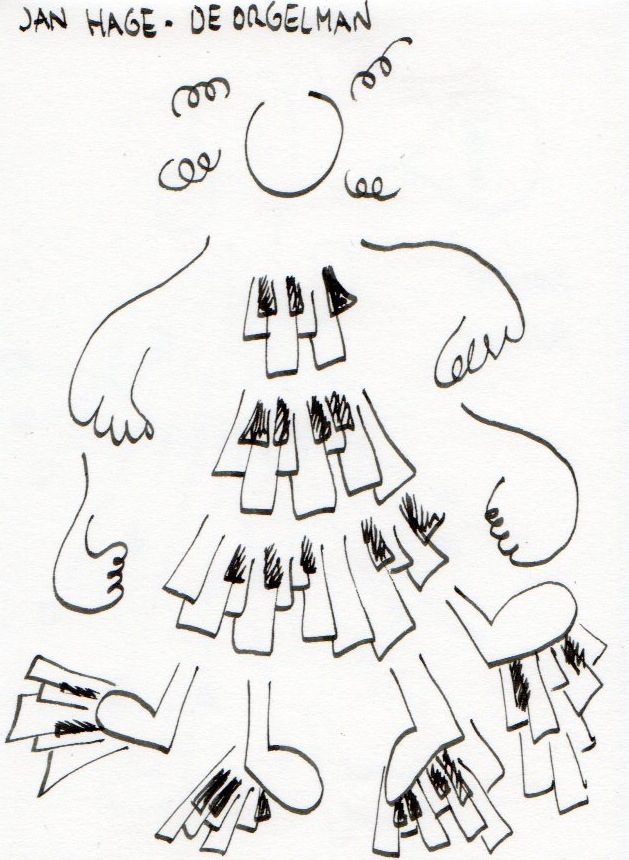 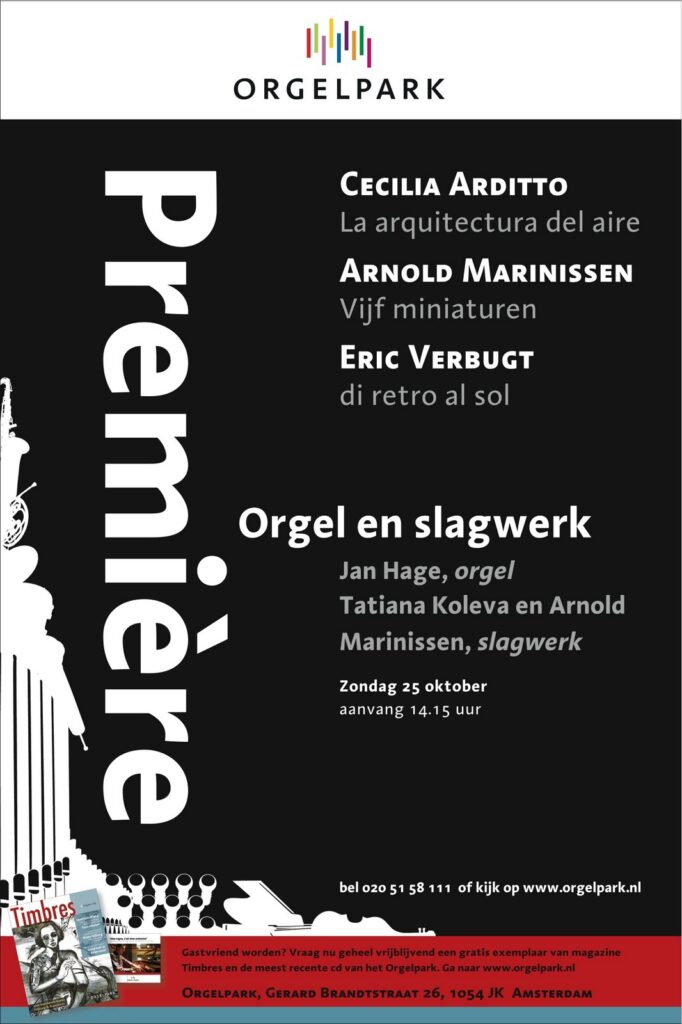 Initially, I thought that “La arquitectura del aire” was about tension and the space between things. In other words, how emptiness can shape things from the outside in.
Three musicians are widely spread out over the hall, with the organ located on top, close to the ceiling. They communicate with each other by playing string telephones – when I was a child, I used to play with those telephones with my sisters.
The usage of the term architecture, in the title of my work, refers both to the architecture of sound and of the building.
My piece is also about air. The organ has one motor and pipes. The vibraphone has also one motor and pipes. The percussionists play a ventilator, a melodica, and an old radio: they manipulate air in different states and frequencies. The title refers to the air too.
This music also speaks about fragility. It is music made of air and threads, basically, made of nothing. It is a nothingness full of intensity, solid and ethereal at the same time. This is the way that sometimes I feel about myself, both very strong and very fragile. Probably some of this sneaked into my score.
But the truth is that I don’t know how to explain my music, or in fact, any music. However, the funny thing, is that I love to do it.