A cheese grater is being played with a toothbrush. After a while, we completely forget the cheese grater and we can focus only on the sound. The continuous fricative noise is colored by mini sparks of high frequencies, short and loud.

That sound progressively becomes a ghost, a bunch of confused energy not attached to a specific physical body. The sonic outcome is different from the sounds produced by the object when in the kitchen. The grater-thing, as a lost map, with its metallic perimeter,  embrace new sounds floating in the sea of abstraction.

Deep listening is in conflict with what the eyes and/or the ears have to offer: is it really a cheese grater or a camouflaged synthesizer? It is known that synthesizers can efficiently produce a broad variety of sounds, they may also change the way they look,

“not what it sounds, the car, the instrument, the voice, but what sounds as sonic materiality and sense”
S.Voegelin

I like the conflict that the grater brings on stage when not performing “spaguetti” but the most beautiful sounds ever. 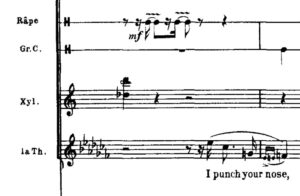